Translated in to English by
P.R.Ramachander 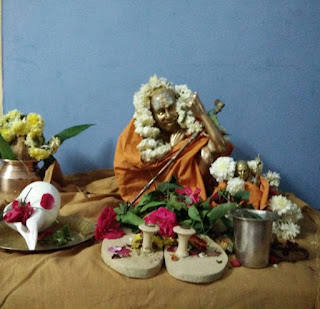 (The Sanskrit original and tamil transliteration  is by my face  book fried Geetha  Kalyan. Thanks to her. Image courtesy  Saanu Puthran  )

I always    sing   and pray with devotion   the sandals  of Paramacharya ,
Which has the   luster of one crore suns  and is the moon of the  city of Kanchi

I always    sing   and pray with devotion   the sandals  of Paramacharya ,
Which   when remembered in an instant   grants   all type of prosperities.

I always    sing   and pray with devotion   the sandals  of Paramacharya ,
Which ends the    sufferings of Samsara   as well as sorrow  of birth cycle.

I always    sing   and pray with devotion   the sandals  of Paramacharya ,
Which is the ocean of mercy  in the greattemple town of Kanchipuram

Those   devotes who   read this pentad   I of Sandals ,
Would get all their desires fulfilled  and would get freedom from all sufferings

Posted by Raja Thatha at 10:53 PM No comments: Links to this post 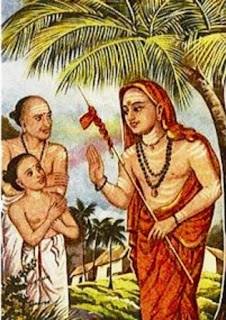 The Mādhavīya Śaṃkaravijayam states that when Adi Shankara was at Kollur , he accepted invitations by brāhmaņas  to have Bhikşa (alms or food) at their houses. On such an occasion he visited a village called Śrī Bali (present day Shivalli ), where every house was said to emit the holy smell of the smoke of Agnihotra sacrifice, to accept Bhikşa. That place was inhabited by about two thousand brāhmaņas who were learned in the Vedas  and performed the Yajnas prescribed in the Vedas. There was also a temple  dedicated to Shiva  and Parvati
In that village there lived a brāhmaņa, Prabhākara, who was noted for his learning. He had a son who though appearing quite handsome, behaved rather like an idiot. Though upanayanam  was performed for him, he did not take to studying the Vedas, instead preferred to sit around doing nothing. Hearing about Adi Shankara's visit, Prabhākara approached the Acharya (teacher) with a load of fruit and prostrated before him. He also made his son prostrate before him. Prabhākara explained to Adi Shankara that his son behaved rather like an idiot and sat idly throughout the day.
Then, Adi Shankara addressed that young boy and asked him who he was. The boy replied in 12 verses containing the gist of the Advaita philosophy.   This stotra is called Hasthamalaka  Stotram. Hastamalaka Stotram is said to have been recited by Hastamalaka when he met  Adhi Sankara.
Hastamalaka(AS clear as Gooseberry in the palm)  was the name given to him by Sankara himself. Sankara, it is said, was so impressed by Hastamalaka stotram that he wrote a commentary on it. Adi Shankara was immensely impressed with that boy  and accepted him as his disciple. He was named Hastāmalakacharya (one with the amalaka fruit in his hand) since the knowledge of the Self was clear  to him like an Amalaka fruit in one's hand. Adi Shankara took the boy into his party.
As the boy was not suited to the life of a householder, the Acharya accepted him as his disciple and gave him Sanyasa. Though he attended the classes held by the Acharya, it was more to verify his own experience than to gain proficiency in dialectics. It was suggested to the Acharya that, by reason of his realisation of the Self, Hastamalaka was pre-eminently competent to write a Vartika(Sanskrit commentary in verse) on the Sutra Bhashya. The Acharya negated the suggestion by pointing out that Hastamalaka’s plane of consciousness always dwelt on the supernal Self. He would not stoop to write books. When the Acharya placed him on a higher level that those engaged in dialectics, the disciples were naturally curious to know how one who was not known to have devoted any attention to learning the sastras could be proficient in realisation. Sri Shankara explained the phenomenon. On the bank of the Jamuna, a great sage was seated in contemplation when some brahmin girls came there to bathe. One of them had a baby two years old. She placed him by the side of the sage and asked him to take care of it till she bathed. The baby slowly crawled into the river and was drowned. The mother was aghast. She took out the dead body of the child and wept bitterly before the sage. The sage was quite oblivious of the happenings awoke from his samadhi. He was moved by pity for the grieving mother. By the powers of his yoga, he left his body and entered the body of the child. The dead child sprang into life. That child was Hastamalaka. This explained how he came to have such an all-comprehensive knowledge without any apparent instruction.( http://www.sringeri.net/history/sri-adi-shankaracharya/primary-disciples/sri-hastamalakacharya )

Adhi Snkara  then   started towards  his next destination and eventually Hasthamalaka  was made the  first Peetadhipathi  of Dwaraka Peeth (Taken from  https://en.wikipedia.org/wiki/Hastamalakacharya )

1.Child  , who are you , where  are you going?
What is your name? From where are  you coming?
For the sake  of my liking to you to increase,
Please tell answers  to what I have asked?

2.I am neither a human being nor Deva nor Yaksha,
I am neither a Brahmin nor  Kshatriya  nor Vaishya nor Shudra,
I am neither unmarried nor  householder  nor one living in the  forest,
I am not also a  a mendicant  but I am the form of  true knowledge.

3.The sun  is the  reason for all activities of mind and eyes,
And exists   like the  sky   which is beyond  all  the  activities,
But is the symbolic cause  of all  known activities,
And like him  I am the form of the soul   which is ever existing.

4.Like the  never changing  relation of fire  and heat,
The soul of consciousness   of jnana exists   with   its own form
Alone   without a second and shining  in various ways,
And is depended   by mind , knowledge  eye  and sense organs to become active
And I am  that  form of that soul aiming  to achieve Jnana,

5.The shining image   of the face    that you are  seeing in the mirror,
Does not have any existence   , separate   from the face  itself,
And  the self reflected  in our mind does not have  a separate existence from God,
And I am  that  form of that soul aiming  to achieve Jnana,

6.The reflected image vanishes  in absence of mirror,
But the face  exists   without   any reflection,
Similarly   without intellect  , only awareness  remains,
And I am  that  form of that soul aiming  to achieve Jnana.

8.Just like  the sun who is one , which  has a form  that is pure ,
And has a  lustrous form  , appears   in various  pots differently,
He who appears   as consciousness  of different bodies is one,
And I am  that  form of that soul aiming  to achieve Jnana.

9,Similar to the sun  illuminating many eyes together,
But not slowly  and not    one   after  another  ,
I am that intellect  which illuminates  many  together,
And I am  that form of that soul aiming  to achieve Jnana.

10.Just like  what is illuminated  by sun
Becomes visible to  the eye, and others  not illuminated  being not visible,
I am  the truth who illuminates   the sun   himself,
And I am  that  form of that soul aiming  to achieve Jnana.

11.Just like a single sun in unsteady water appears to be many  ,
And reflected   in steady    water   as single   and steady,
To the unsteady intellect  , one soul   appears to be many,
And I am  that  form of that soul aiming  to achieve Jnana.

12.Just like a fool  with  heavily   clouded   vision,
Thinks that  sun is covered by clouds   and is not bright,
A man whose   sight is covered by idiocy  thinks that he is tied up
And I am  that  form of that soul aiming  to achieve Jnana.

13.The one object pervading   in everything  in this world,
Is  the  one which cannot be touched by any of those objects
And is like  the immaculate   pure nature   of the sky,
And I am  that  form of that soul aiming  to achieve Jnana.

14,Julk like differences are   seen   among good crystals,
Based on conditions where they are kept , persons also differ   due to varying intellects,
Which is similar to changing appearance of moon in moving water,
And I am  that form of that soul aiming  to achieve Jnana.

Posted by Raja Thatha at 2:00 AM No comments: Links to this post

Greetings for a  happy pongal to all my brothers  and sisters,
Who  unfortunately  were  not born with me 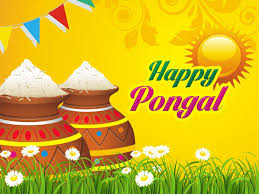 (I am greeting you all  by using a poem written by  a poet called Koodal and translated  by me, . I am giving below  the Tamil  Original)

This is the  divine festival day of Tamils,
This is the divine day   that makes  prosperous ,
The life Of  all  those  who speak Tamil,

This is  the divine day that enthuses ,
The toiling   Farmers  who cultivate,
By removing   their tiresomeness,
And drowns them  all in great joy.

This is remarkable   festival day,
Which wakes  up   early in the dawn,
The ladies who sleep  deeply,
And make them draw  Kolam(Rangoli)

The is the valorous   divine festival,
When  the ferocious   bulls are tamed.

This    is the modern festival day ,
Which unpacks   old   thoughts,
And fills  your mind with  modern thoughts.

My  great greetings  of the Enthusiastic pongal,
To all those  Tamils who unfortunately  are not born with me.

Posted by Raja Thatha at 5:53 AM No comments: Links to this post

Posted by Raja Thatha at 1:06 AM No comments: Links to this post