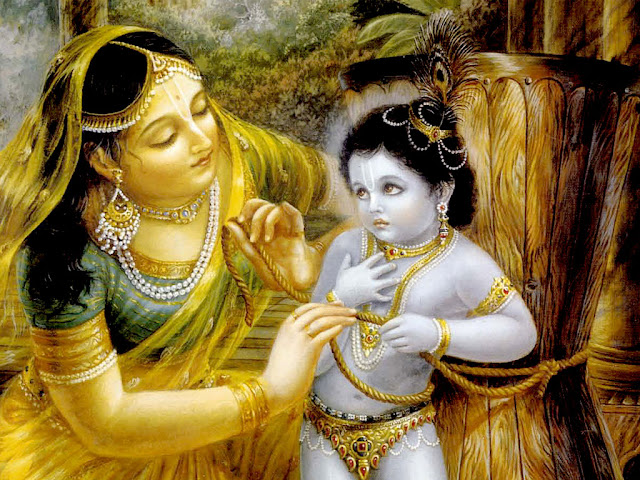 (This great   work is  in praise  of Nammazhvar   , one  of the great azhvars . Nammalwar is considered the fifth in the line of the twelve alwars. He is highly regarded as a great mystic of the Vaishnava tradition. He is also considered the greatest among the twelve alwars and his contributions amount to 1352 among the 4000 stanzas in the Nalayira Divya Prabandam. As a child  it seems he got up   on a tamirand   tree  in a place  called THirukurukoor(near  presentAzhvar  THirunagari)  and was doing penance  in a hole of the tree  . The Tamil poet  Madhura Kavi Azhvar (who was  fromn THukoilur  and who did penance in North India saw  a bright light in South india. He searched for the light   and reached  below the tamarind tree and became   his great  follower  . This poem is in praise of Nammazhvar   and is written by Madhura Kavi. This great work is included in the nalayira   divya prabandham after  1000 verses. It is considered  that this work is the key that opened   the famous Nalayira  Divya prabandham.. It seems these verses   were chanted by Nathamuni 12000 times to propitiate Nammazhvar   and to get   Nalayira  Divya  prabandham from him. These verses are   recited on festive occasions on most  of the Vishnu   temples  in  Tamil nadu. You can hear it  https://www.youtube.com/watch?v=B0hQIBsuZrc  )

THaniyans (Poems   which stand out alone often in  praise  of author)

I salute  Nathamuni  , who is born in the  clan of devotees,
Who  made the principles of Vedas  as clear as  the Gooseberry in hand
Vedantha  Desikan

Let Mathurakavi  who does  not   know anything  except  Nammazhvar) ,
Who derives  pleasure   in singing  the Upanishads of Nammazhvar,
And   who by   his immate   qualities   has  Nammazhvar   as the Lord,enter my mind .

I do not know  anything    except  , that Nammazhvar  ,
Who is also called  Maran  who  created  the Tamizh Vedas,
And who Is the  leader  of pretty  Thirukumgur would uplift us
Become   our leader   and would be our  guardian)

My  Lord  who is  the great  illusionist  ,
Allowed   his mother  to   tie him  with  a small knotted  thread.
And I take   refuge  in the Nammazhvar  of THirukungur
Which will generate , nectar  like   sweetness  in my toungue.

I got great  pleasure  by telling it with my toungue,
And I embraced   his    golden feet, which is the truth,
I do not  know any   God except the Kurukoor   Nambi(Nammazhvar)
And I will wander  singing  the sweet  music of his poems

Though I was   wandering  singing THiruvai mozhi,
I was able to see his   divine   form with Lakshmi which is black,
And  this great   blessing  was received by me  who is the  the  slave ,
From   the Azhvar  who is the jewel  of great  THirukunkoor  temple

Since the blessed  people   who have learned   the four Vedas,
Would   consider   me as  greatly inferior ,
Sadagopa who   rules me like a  mother and  mother,
Is considered   by me   as my  Acharya(guru)

I  believed   in all good things  that people posses,
And hungered   for the  women belonging to others,
But Today   I have  become   admirer  of  ,
The nambi of Thirukumkoor having    gold like houses.

My lord ordered me  from today to seven births,
To   chant   about   his fame    daily,
But  The nambi  of Thiukoor   which has,
Towers   as high as monuntain will never find fault  with me

After  finding me  , Nammazhvar  ,
Completly destroyed  all fate  of my samsara,
And I will   tell it so that  all eight   directions  will know,
About   the  grace   of Sadagopan(nammazhvar)  who sang  in chaste  Tamil

For the sake  of increasing  joy of his devotees,
He sang to them about   the   meaning Of Vedas,
Under  divine control  using  thousand  sweet tamil verses
And his   grace   is the  greatest  in this world.

He made   great Vedic pundits   sing   the  deeper ,
Meaning of Vedas  and  filled it in mind,
And made  the  gret Sadagopan enter  in to my mind,
And I became  to him   the passionate slave  then itself.

Though  there  us no use out of it  and though they  were not fit,
He  corrected their actions well and made   them work for him,
I am only trying    to get the   love   of  the feet  of
The  nambi of Kurukoor   surrounded by pretty orchards  where koels sing,

The lovers of Narayana , who were  able to reach him,
Are all loved   by   the Then karugoor  Nambi ,
And all those   who have faith in   his words,
Would find    that  hs place  is Vaikunta  itself.

I surrender    to the divine feet of Madhura  Kavi aazhvar

Posted by Raja Thatha at 6:56 AM No comments: Links to this post 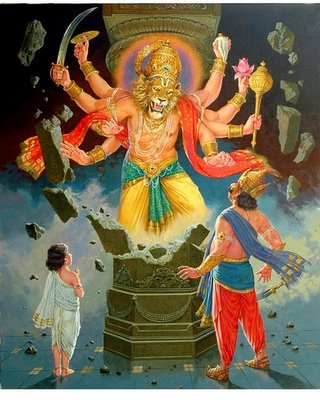 Narasimha  is here  , he is  there  in heaven  and whrever I go, Narasimha  goes there,
Narasimha is on the outside  and  is our heart and I surrender  to the primeval  Narasimha

Though   your hands   are  like lotus, the  wonderous peak  of your nails,
With which you tore apart like a bee  the  body of Hiranya  Kashipu,
Hail  Lord Vishnu  as lord of  universe  who is Kesava   aho took the form of Narasimha

Posted by Raja Thatha at 2:48 AM No comments: Links to this post 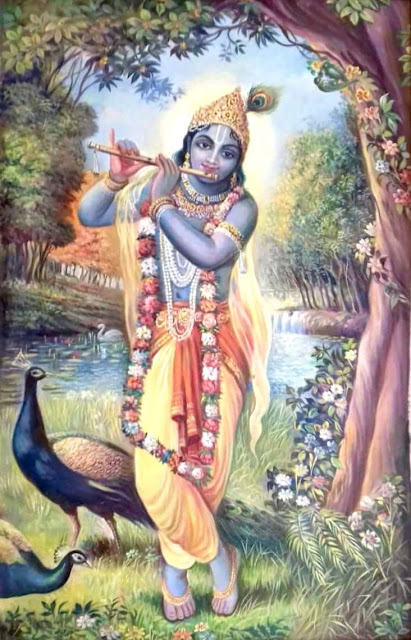 Wanting to see  your  flower like  body  which makes,
The black cloud   and  Kayambu (memecylon flower) ashamed , I salute  you, Mukunda

Oh Golden God   who grants  boons to all  devas
Why you do not have  mercy towards me, Oh Mukunda

Instead of being forced to search  the root of births  of insects
And instead  I am searching your feet , Please  shake  it  Mukunda,

Lifting  the mountain as umbrella  and playing the flute,
Please  talk to me in  the  mind  of mine , Oh Mukunda

Please show  me your group dance , playing of flute,
And the friends  who are  with you , Oh Mukunda

You rolled the mortar  to which you were tied, up rooted the tree,
And gave  Good fate  to  Nala and Khoobara, Oh Mukunda

To the fool  who came to trouble  you as a cart,
You became  an evil force though you have a flower like body, Oh Mukunda

Without being able to move my hands and legs  and suffer,
Lead  me towards  the  path of salvation, Oh Mukunda

Please show me   your lisping talk,  slight  baby like plays,
And your  very red   lips to me so that I get satisfied, Oh Mukunda

I want to see  your  side long glances  which keep on staring,
At me  and for that  purpose I  am saluting  you, Oh Mukunda

You wear  a  leaf     as a loin cloth  and even that would  be there  some times,
AS a incomparable play  of youth oh Jagannatha, oh Mukunda

The   state that came to Poothana  who took very  cruel form,
Is praised by  women who are  cheating  to me, Oh Mukunda

Oh Lord   who lives  in Vamalaya, Please  give your  nectar,
Like  names  as boon to my heart , Oh Mukunda

Posted by Raja Thatha at 2:22 AM No comments: Links to this post

Prayers for those born in different stars

Prayers  for those  born in different stars 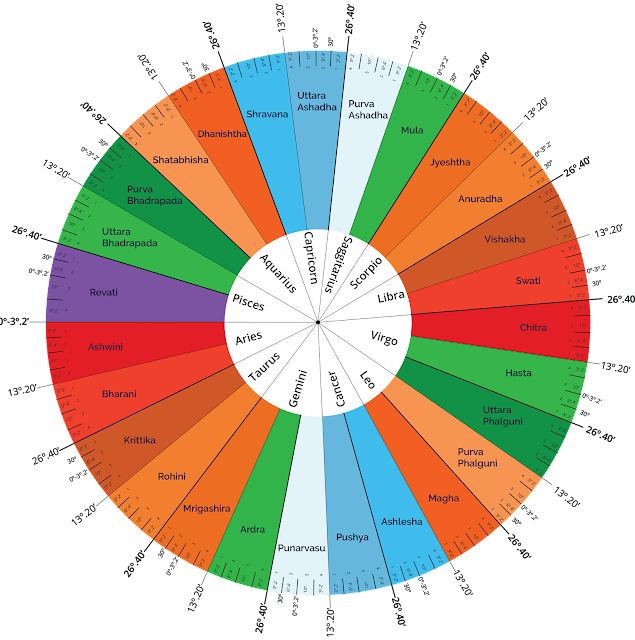 (Chant  the prayer  to yor birthstar, daily thrice after  morning bath .Many  of the problems coming to your  life would be solved and life will become happy  .The names  of stars   are given in english, malayalam , Tamil, Telugu   and Hindi.Another   set of prayers  addressed to stars  in tamil are  given  in https://agasthiar.org/AUMzine/0004-ny7.htm with a request  not to copy  and paste)

Prayer  to the star  /Nakshatra

Oh Krithika  who has smell of lotus, who releases  us from sin,
Oh Krithika devi  , please take   mercy and help me

She who resides in chants who is the wife of Chandra
Oh  Mrigaseersha devi  , please take  mercy   and help me

Oh Star   who is worshipped by devas, who eains good qualities,
Oh Arudhra   devi  , please  take mercy   and help me

Oh Star who lives in lotus flower  , who is worshipped by groups of devas
Oh Punarvasu   dvi, Please   take mercy   and help me

Star who  lives on the tuft of sages, Who is worshipped  by devas  and sages,
Oh  fortunate  Makha   devi  , Please   take  mercy and help me

Oh Star who helped  in killing I of asuras  , who is worshipped with joy,
The Hasatha    devi of profits  , Please  take  mercy   and help me.

Star   who worships  with Kumkuma , who is served  daily,
Ofh Vaishakha devi, Please  take mercy and help me

Oh Star   who shines l;ike moon   who is filled with song of Gandharwas,
Oh Anuradha devi  , Please    take mercy   and help me

Oh  Goddess of learning , mother of Bhrugu, who is the tower of Manthras,
Oh Jyeshta   devi , Please   take mercy and help me

Star who is filled with  the peace  of Sankara  the Guru,
Oh Moola  devi of food  ,please  take  mercy and help me

Oh star   who serves  Achyutha daily  and has been given boons,
Oh Poorvashada   devi, Please take mercy and help me

Oh star  who destroys sorrow   and is  decorated by gems,
Oh Uthrashada   devi , Please take mercy and help me

Oh Star   who  is worshipped by gems , who has peaceful looks.,
Oh Sravana  devi,  Please  take mercy   and help me

Star who serves greatly her husband  with Cauvery and Ganga
Oh Sravishta devi  , Please take mercy and help me

Star who gives us gold   and does  minute helps,
Oh Revathi Devi , Please  take mercy and help me

Posted by Raja Thatha at 8:09 AM No comments: Links to this post