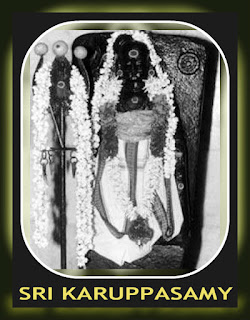 (I found that  this song was posyed in 2015 in a facebook page  of Sappanikaruppu ,I do not know who is the author.Karuppanna swami is one who is the Security guard of SAbari Malai  Ayyappa Swami   and is  included  as Parivara  devathai. I never knew  that there is a  Sanskrit prayer  addressed  to Karuppanna Swami)

I salute him  who is of the colour of black cloud, who has  two hands,
Who fights with a sword, who is lustrous with large teeth   up to his ears

He  is huge, has a form with large limbs and removea  fear of those  who salute him,
And who dances mounting on  his sandals

He is a  boy with luster of sun of dawn, wears white dress,
Is dark blue in colour and has a  curved foot

He has hairs  flying in all direction., is  joyous,
Due  to intoxication of wine, black in colour and is son of Krishna

He wears a blue gown and  is huge  ,
And on face  he sports a Naamam(mark of Vaishnavites)

With a waist belt tying his  Dhothi ,
He  is decorated   in all waya

Armed with a  hot  flat  iron,
He is also  blessed  with  divine strength

With blood red eyes   and wearing black cloth .
Anf having two hands , he has pretty looks

Armed with  sword   as well as  staff,
He shines with all  decorations

With a   spark of fire  standing  nearby  ,
He is very greatly valorous

I always cherish  the god,
Who is famous as  Karuppanna


Sakutations  to the assistant  of Great  Sastha
Posted by Raja Thatha at 6:04 AM No comments: Links to this post 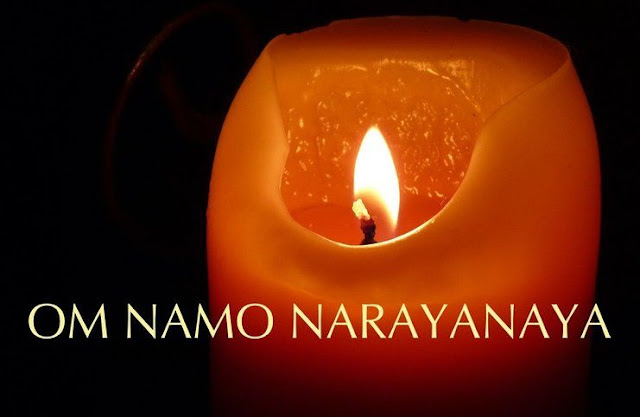 The word “Narayana “  has several meanings like , “one  who lives on water” The supreme being” , “Direction  of human being” , “Shelter  of a human being” etc..The Narayana  suktha  , one of the Vedic  prayer  addressed  to Narayana says

I meditate on God Narayana,
Who is much greater than this world,
Who is forever,
Who is the world,
Who destroys sins and suffering,
And say, that this world is Purusha,
And is alive because he is inside it.

I meditate on Narayana,
Who owns this world,
Who is the god of all souls,
Who is forever,
Who is personification of good,
Who never slips,
Who needs to be known with great effort,
Who is the soul of everything,
And who is the great destination.

Narayana is spread,
All over the world.
In everything that we see and hear,
And in its inside and outside.

There   is a famous   story of Ajamila who did all possible sins  but went to Land of Vishnu  because  , when he  was dying he called  his son, whose  name   was Narayana.
One of the modern day saints   summarising  the   greatness  of name Narayana   says  “Chanting  the Divine name Narayana awakens   the  cosmic love within you so that you can love  everything Unconditionally”

There  is also a great  religious  poem of a great  Vaishnavite   saint  of Tamil Nadu  called Thirumangai  Azhvar   about  the greatness  of the  name Narayana. THirumangai Azhvar   was  one of the great Azhvars  and was considered as the last of the twelve Azhvars who were  great  minstrels  of Vaishnavism. These  minstrels went  all over India  visited  great Vishnu  temples  of those times  and composed  prayers(Pasurams) , praising  Gods  of these temples.Among them  the compositions of THirumangai azhvar  is supposed  to be maximum .According  to great savants his most  important  pasuram is

I found out   the word   that gives  all that is good,
That gives us noble birth, grants   wealth .
Which would  mke all the sufferings of devotees,
In to nothing, grant  us forever stay  with  God,
Give  us chance to do service  to God with grace ,
And  would do  everything that mother will do,
And that  word is   the name   Narayana

Great scholars  believe  that Pasuram  gives  out the essence  of Divya Prabandham (the collected  work of all Azhvars.They believed that  if this pasuram is chanted  in the  ears of dying man, he would definitely attain God.

Om Namo Narayanaya.
Posted by Raja Thatha at 4:45 PM No comments: Links to this post

(This prayer   occurs  in Shiva Mahapurana  in Rudra  Samhitha. You can read it in Sanskrit   in http://www.brahminsnet.com/pdf/Sri%20Shiva%20Gadyam%20-%20Shiva%20Puranam.pdf)

OM  I salute   the  God of all devas  , who is saluted by   devas as well as asuras, Who is the great god in the past  as well as present, who has green and brown eyes, who is endowed with strength , who is personification of wisdom , who normally has the habit of sitting on the hide of tiger  ,

Lord of all the three  worlds  , God  , He who  destroys, he who has a  green  eye, Who creates the fire of kindness    at the end of all  time, He who is the lord of Ganas  ,.He who looks after  people, He who has a great arms, He   who has great hands, He who holds   the trident, He who has   huge teeth, He who is  end of time

God of all beings  , Cave dweller , Lord who keeps beat to the sound of Veena  , He who does not have death  , He who has great vision  , he who is similar to young sun  ,He  who lives in cremation ground  , He who is God  , He who is consort of Uma , He who conquers   enemies , he who  keeps his eyes on lucky people

He who is enlightenment, He who does acts  , He who is the destroyer , He who is a scholar, He who moves , He who lives in forest , he who is worshipped   by those  devoted to him, He who carries the world .He who creates  the world , He who is masculine, He who is stable  , He who is fixed

He who presides over Dharma , He who is  thrice protected , He who is past and future  , he who has three  eyes, he who has several forms, He who has lustre equal to sun, He who is God, He who is the lord of all musical sounds , He who frees us from all problems, He who ties, He who  wears everything

He is the greatest  Dharma, He who was shared by Pushpa DAntha ,He who is most important  , He who destroys everything  , He  who has  golden reputation  , He who is the entrance  , He who is huge  , He who is greatly valorous   Om Salutations, salutations to you.
Posted by Raja Thatha at 2:32 AM No comments: Links to this post 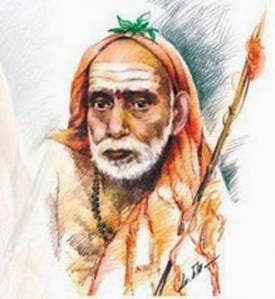 (Very rarely  people compose  stotras  in Sanskrit.Here is one composed  by Smt  .Geetha Kalyan as a prayer  to Maha Periyava)

I sing about  the deiva  Vani *   and also,
The visible  of  of  Saint  Chandra  Shekara,
I salute  the good teacher  with form of Lord shiva with a crescent,
Who had the form of  Swami Nadha**  also

I salute him   who is the essence of the  principle  of Advaitha,
Who had the form of teacher  and that of a king of saints,
Who was  filled  with  the  divine  joy,
And who was  the incarnation of God without  beginning  or end

I  sing about   him who was  the god of all ,
He who was always truthful . the lord of all worlds,
He who destroys sufferings of  all people  .
And who is the personification of  all powers

He whose   eyes were  filled  with mercy, He  who is,
Personification of Advaitha in  the form of Kanchi Kamakshi,
He who meditates on the feet  of Kameswara .
And who is seen wearing divine  ochre  robes.

I salute my Guru, the primeval Guru of the universe, the great Guru,
Who destroys the disease of birth , life and death,
Who destroys the sins committed in this and earlier births,
And  The one who grants salvation , the aim of life,.

I always  thimk about him   who  has face
Like  full moon of autumn and who has  a peaceful mein
I sing about him  who is busy nurturing  four Vedas,
And who islike lord Shiva  with a pleasant smile.

My only   support is the lotus feet of him,
Who used to give boons fulfilling the  desires of devotees,
Who is a  complete  divine incarnation,has form of Para Brahmam,
Who has   lotus like eyes   and is divinely pure.

I sing about , the god like king of Gurus,
Who gave us   wisdom , who has  a form,
Of divine wisdom , who shined with a  crescent ,
Like crown and who gave beings long life and pleasant life.

Benefit
If a human being reads this octet on Guru daily morning ,
He will get graceful looks of Guru which destroys all sins

Posted by Raja Thatha at 5:36 PM No comments: Links to this post

(I did not know this story but read it   somewhere in Whatsapp. My thanks to the author)

There  was a great  Scholar  called “Appayya  Deekshitha”  .His grand father’s name  was” Achan Deekshitha”  .He was also called “VAkasthalaxcharya(The learned man of the chest)” ,There  is an interesting story behind it.
It seemd  King Krishna  Deva Raya  had come to Worship Lord Varadaraja  of Kanchipuram .Among the learned  Invitees  “Achan Deekshithar”  was also one  . When the Purohith  showed  camphor lamp to the God   , the king felt that the God  was  bending   and examining   some thing..
The king asked  “Achan deekshithar” for the possible   reason for this  and he replied

The God  Varada seeing  your golden   wife   beside  you ,
Became  surprised and felt  she was Mahalakshmi  herself,
And  examined   his  chest  to see whether his wife  was  still there.”

The king enjoyed  the poem very much   and along with great  presents  ,
Gave him a title “Vaksha sthala(The chest)”  and from then  on” Aachan deekshithar”  was named  as “Vakksha  Sthala Acharya,”

Posted by Raja Thatha at 1:22 AM No comments: Links to this post