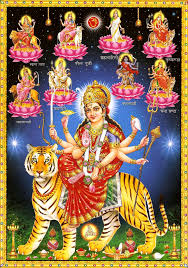 (  Shakthi worship aimed   at the  worship of   woman as  the power  behind everything   is possibly  very unique in Hinduism.  Though  the goddess Shakthi   plays a secondary roles as consort   of Lord Vishnu, Shiva   and Lord Brahma,  right    from the upanishadic days   , her portrayal   as the unique power   which  makes   all   the gods, Pancha Bhoothas , Ashta dig Palakas etc   to act  as they do is well recognized.  During the Navarathri(Dusserah)   she  is worshipped in nine different forms  , Nava Durgas   are   those Shakthi aspects   worshipped  during different days of Navarathri. The stotra in Sanskrit script can be accessed in  http://www.indif.com/nri/mantras/navdurga_stotra.asp)

Shailaputhri
Daughter   of the mountain

Salutations to Shaila puthri  , the  fulfiller   of desires ,
Who has     the moon’s crescent , who rides   on a bull

Let  the incomparable   Goddess  Brahmacharini , holding in her ,
Lotus like hands    the rosary   and the water pot shower  her grace on me.

Chandra Ghanta
She who wears  a semi circular  moon.

Let   the  famous Chandra GHanta  , riding   on a tiger ,
Who is intensely  violent and angry , may shower her grace on me.

Let the renowned Skanda Mata   who sits  on the throne,
Who has   lotus flowers in both  her hands  , be kind to me.

Let   Goddess Kathyayini  , who holds   the shining  Chandrahasa ,
Who rides  on the imperial lion  and  who is the killer of asuras  give me good things.

Let the  fearsome black  Kalarathri , who has   one braid  ,
Who decorates herself with a rose and lotus flower ,
Has ornaments in her ears  ,  who is   naked ,
Who rides on a donkey , who has  long lips  ,
Who has  applied    oil   all over her body,
Who wears   several  coloured ornaments,
Remove    the darkness   of my ignorance.

Let the Mahagauri   who rides  on a white bull  , who is dressed in white,
Who is pure  , give me auspeciosness and make  Lord Shiva happy.