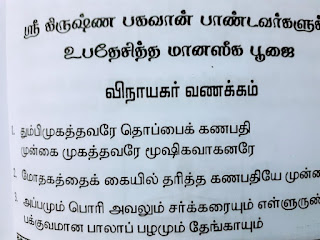 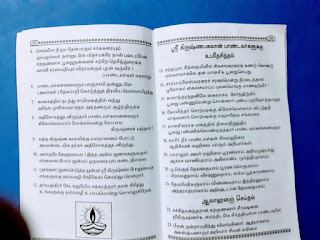 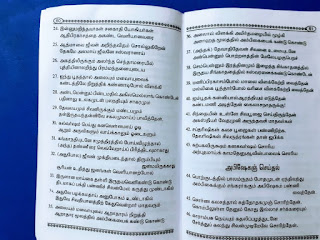 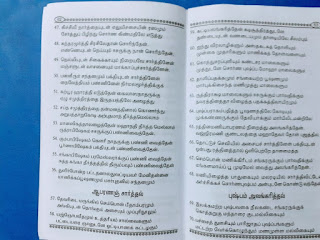 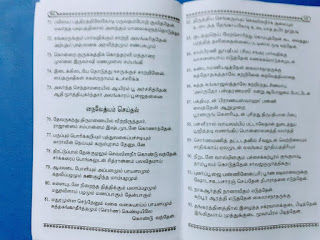 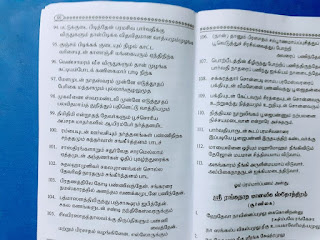 (A remarkable  of mental  woship of Lord Shiva  .Since many  of the tamil words referred tp flowers  , dishes and traditional ornaments  it was not possible to translate them.I have attachment haven the images  of tamil original)

Oh Lord who has Modhaka in his hand, walk in front

The five  pandavas   along    with  Panchali,
Lost their bodies , lost all   their  money  ,
Walked in the forest, reached the forest  of god,
And were surrounded by several sages as well as Brahmins,
And were  very sad and God  Gopalakrishna,
Came , so that all their problems can be solved there  .

They offered flowered   seat   to lOrd Krishna  who came,
And Dharma puthra   sat  near him with great  sorrow

Oh Achyutha  please hear, In this   entire   world,
No human being like us has been seen by us

Oh Krishna the sorrow   of both is more than sufficient,
Oh Rishikesa  , please tell us   a good way  to get  out of it

When Dharma puthra  asked like this, Lord Krishna laughed
And told, I will tell you  a good way   to get out of it

See  all the time  Lord Shiva Sankara  in your thought,
And auspiciously if you  offer him mental  worship ,
And if  you reach that  God Samba Parameshwara,
The entire  earth will become yours and you will rule  all over the world.

Then at the end of the time   , you will reach Kailsa ,
You please worship  said , the blessed  Purushothama

No one can know his   greatness  completely,
Sound of sky ,  the god of the entire  universe,
The god of earth  , the God with full form,
Brahma,  Vishnu   as well as all  beings,
Deva sages , devas , Indra,
T he   soul within us as ,and The  god whom we  worship

About the  proper form of  the God of good character who is God of divine   ever lasting joy,
When Lord Krishna explained Bhima  one among the famous Pandavas ,
Knew  about  it well and  shined  like his soul,
And sage  Agasthya also knew   about the greatness of Shiva

Others    who knew   about  that were  the sanaka sages,
The primeval luster  and the  huge  great  opening

I will tell you how the soul   was understood by the body,
With body as   the vessel, soul   as God,
Understanding  the opened lotus flower   which is inside,
By the brain for the sake  of merging with Brahmam

The wind of mind which wanders  as the five elements,
Was stopped in the neck, made to understand like a  mirror,
And I saw   the entire  thing in the   great  universe,
The fourteen worlds, joining  of several  rivers , The temples of gods,
The place where  lord Shiva lives were assumed.,
By me   as existing   within my heart

After  a rain of hail stones, when it runs in to  a  torrential water,
As rivers  , streams, canals    and   springs,
And join together   and if it falls in the ocean,
Then it will not be possible to separate   that water in to groups

Like that if soul gets salvation  , there will no birth again,
like people going away when sun rises  up
Then the dark  maya  goes away  and seeing the   pure heart,
Doing strong   devotion, and if we develop an interest in Lord  shiva

And If that becomes  practice   and we start  feeling it ,
That is the cause of knowledge of Shiva, said Madhava

Stopping the mental air in six adhararas,
Seeing in the root  of six adharas   the goddess
I cleaned it by fire, got drowned in the nectar  of rain,
Saw  the mother goddess  in anahatha,
Seeing the god of gods lord Shiva   with mother goddess,
Kept it in the golden   box called love so that it became pretty,
And on the  gem studded throne  made  of copper,
On the throne of my mind , I saw   the god.

I lit  the lamp like the shine of gem and kept it there,
Like a row of jasmine flowers, I lit a row  of lamps  and kept them

With the maids called five elements   I  waved the lamps,
I  tolled bell by my neck, to the lord  of Kailasa

I then  did worship of Lord shiva  in my thought,
With kalasa  pooja being done by the vedic sage Agasthya,
Great sages,  and   the   saptha rishis,
With deva Rishis    chanting  Shiva  Rudram,
With karpaga trees showering   rain of gold,
With kamadhenu wonderfully  pouring   cows milk

Consciously I bought  nectar  like   in golden pots,
And I  did abhishegam   with it to Sankara  and  the mother goddess

With a golden pot I poured pure  water,
As well as pure honey   mixed with pure sugar

Ghee from pure cow’s milk along with kadali  banana,
I poured  it on the   head  of  Lord shiva

Along with Kichly lemon , I took pure lime juice,
Squeezed them  and took the juice  in a golden cup,
And poured  it on the head  of The pretty   God,
I also poured oil mixed with ghee  on head  of  God

I then applied thickl paste  of gooseberry   and soapnut,
I also applied the  scented turmeric paste  on him for protection

I mixed   essence of rose and sandal paste   and applied it on him,
I prepared holy offerings to the purest of gods

I then offered the worship with  lighted camphor  to lord of Kailasa,
Calling the seven oceans   within my mind,
Then I brought seven  oceans to my mind,
Brought the 66  crored wonderful   sacred waters,
Using my mind and I  anointed    the rudra,
With waters of all   great rivers.

On his hips  I tied  a golden  yellow silk cloth,
With moving upper cloth  and sacred thread

I  tied  the  waist thread   and decorated him,
With anklets   armlets    and ringing bell in anklets

With  rings in all five fingers, the luster of eight  bangles,
With front hand amulets and shoulder  bangles made of manikhya

With bunches necklaces  one below other  , chains with several rows
The pretty necklace with golden flowers   as well as  pearls

The  hanging pendant  , the doubtless  ornaments,
The beaded  necklace with pearls   which suits his chest

Rudraksha garlands   for lord Shiva as well as  to Parvathy,
Thousand pendants   decked  with nine types of precious gems

Crores of ornaments decked   with  Pushpa   raga gem,
For the three eyed God   and his lady  on their chest

The ornaments  studded with rathnas  I wore him  till it is full,
I made maha deva  wear  the globe made  of diamond stone on his sholders and arms

I made the god  wear  the ornament  made  of nava  rathnas,
Which was shaking and had great luster on his   ears

For Lord Shiva and Parvathi, crown made of pure gold studded  with gems,
Auspiciously I kept on their hair with flowers to decorate them

I offered a  gem studded slipper before  his flower like feet,
For worshipping him with love  I brought golden flowers

I took crores of Vilwa leaves and heaped them like a mountain,
After making   innumerable garlands  with opened  flowers,
I  put them on Lord Shiva  and Parvathi  and decorated them
Wonderful flower  varieties  Aravinda  and  Champaka

After  making a garland of flowers I put it on  the God,
With Saptha rishis   chanting  Sahasra  namam
I worshipped  him  with thousand decorated hibiscus flowers
And the great God enjoyed this   decorative  worship.

The God  with pleasure  sat on his divine seat,
With liking I brought , Royal food and samba rice Food for lord shiva

Dal , fried side dishes and ten type of Pachadi(liquidpungent side dish),
The ghee of the cow, Sugarcane juice  along with honey,
Thirattupal( solidified milk with sugar) , then kuzhal(thich sev)  and red tender coconut  I bought,
I also brought Chakkarai pongal with various   mixed rices

After pouring  the pot of ghee  , I kept pure honey nearby
After spreading all the food articles, I covered them with silk cloths

The incense of Sambrani  , lamps for Shiva Sankara  and Parvathi,
I took in perfumed state , with humility   and devotion

I rang the  huge bell  for the  lord of Kailasa,
I sprinkled  pure water  all around the offerings

I sprinkled   all around it with pure   ganges water,
And made offerings of food  saying ”I am serving you nectar”

Then with  great  devotion I  offered saying “Pranaya   swaha”,
And after  the  completion  lord  along with Gauri  ate to their satisfaction

After washing their mouth with  rose water, and wiping  it with silk,
After worshipping , saluting his feet , after making them sit on a  golden seat

In gem studded golden plate along with betel nut and betel leaf,
Nutmeg  , cardamom ,  cloves   as well as mace

Water along, long pepper  , edible  camphor, saffron,
I offered thamboolam  to the god who knows  everything

I made a repeat worship   to him who had a  complete  form,
Then I offered g him 16 type  of hospitalities and made a  lamp worship

I worshipped him with different type of serpent lamps,
Then I worshipped lord of kailasa  with camphor

Holding   decorations, with umbrella  giving them shade,
With Kalanji maidens holding various gifts    standing  in a

With  white chowrie fanning  , with decorations  booming,
With  ladies standing in a row   to sing about their fame

With playing of nadaswaram and  drum,
With  big drums and flute  playing

With morsing  playing musical notes in the front,
Praying them in various ways and the eighteen instruments,
Playing   Dhimi Dhimi , With Devas  showering   flowers,
With one thousand apsara  maidens   dancing

Ramba with urrvasi  dancing there,
With all Gandarwas   sang  classical saongs,
Six sasthras along with summary  of four Vedas,
Being loudly   chanted  by Brahmins with great praise

I went round   Lord   Sankara  one   crore times,
And in Namaskara  I did without end and with  great devotion

Sitting on a lotus pose  I chanted  Namashivaya,
Along with all songs For Chandi  Nandikeswara  also

I also created satisfaction to all of them  due to prasadam of  Lord Shiva,
And I also gave the prasadam to all people

I also ate  the prasada  fully, took flower,
And kept it on my head, praised  him and saluted him

Sitting below   his golden seat, I was  praising and submitting to him
I  submitted to the  Lord of Parvathi   and  I  got merged

Those who worship  lord Shiva along with Parvathi  ,
In this manner   and are able   to  have them in their heart,
The fate  which is an illusion would go away, the desire in mind will vanish,
And they   well get very great lustrous shining  powers

The pride  will go away    and they will be full of God’s grace,
And they will  get merged with the consort of Goddess