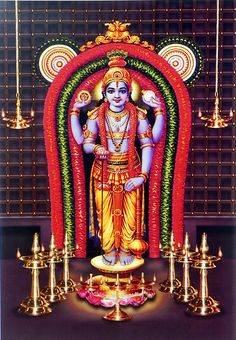 Hail hail  Lord with   eyes  like  pure  lotus petal,
G Hail hail Lord  who is pretty and has a  joyful form

Hail hail best Purusha   who is  primeval,
Hail hail who has undertaken to be merciful

He who is praised   for his character by  groups of sages, hail,hail,
One who has  one soul as  well   as many souls , hail hail

Oh lord of the  universe   who grants prosperity  , hail  ,hail,
He who decorates himself with crescent of moon, hail.hail

The lord of the clan of  Sun   who has blue lotus like eyes  hail, hail,
He who sings prettily  in his   flute  , hail,hail

Oh lord with lotus like eyes who cut off bad people  , hail,hail,
Oh Lord who looked after great elephant  which  is holy, hail,hail

Pretty and black and  belonging to great family   , hail, hail,
He who walks  with  decoration of gem studded ear globe  , hail, hail

Lord whose  ornaments make  janajana  sound  and he speaks softly   hail hail
Lord who makes  sound on floor   with his  lotus like feet,  hail,hail

He who exterminates asura clan  and looks after devas,
The kesava who destroys avarice   for  money,  hail, hail

Nara and Narayana    are  lotus eyed,
Look after us Krishna  who is very kind/

Oh most divine lord  who sleeps on lod of snakes  ,hail, hail,
Oh lord who killed the clan ofasura of face of crane  , hail,hail

Oh charitable   one ,oh lord  of  Yadhu clan hail , hail,
Oh Great one of clan of Surya who is   the greatest of Raghu clan hail, hail

Oh pretty one who is like moon, who has face  like lotus,
Who does not have six   emotions  , destroyer   of six waves of existence

Oh Lord with black  lotus like eyes, hail, hail,
The  God who was friend  of Bala Rama, hail, hail

Oh lord of earth   who  roams in the dissolved world  , hail
Oh  Merciful one   who does  not have have adultery   hail