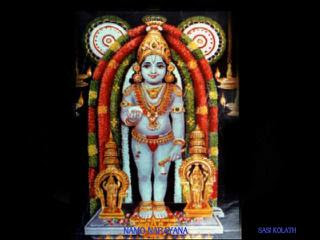 Oh Padmanabha  , Oh divine God of all,
Oh God with lotus like eyes, Salutations,
Oh considers  the hug of gopis   as reluctant,
Worship  , salutations   to him,
Salutations to Vasudeva,
The  Lord of Vama puri

To him who   has  hanging ear globes,
With tawny yellow    good gems,
Lord who  goes to lasses in hundred homes,
And who is lord of love  , Salutations

Lord  with  eyes  like  lotus flower,
Who is very  ancient, salutations,
Lord with  gems  covering the front, bangles  and crown
Which are  great qualities salutations.

Salutations  to the lotus feet  , with full blessings,
And being   worshipped  by  the lotus of heart,
Salutations to the Purusha   with hundreds ,
Of varied gems   and having attractive  limbs.

Salutations to  infant form of God,
Whose  tender  limbs  indicate his greatness,
Oh Lord with lotus   feet who shined ,
In the   huge group of cow herds.

Oh lord saluted by  sages Paila , Jaimini  , Valakhilya,
Shukra   and others  , salutations,
Lord who  makes himself changes  the prakruthi,
And who is difficult to get , Salutations

Lord who  with his  looks like a young animal,
Attracted Poothana  , salutations,
Lord who is famous  for directly  freeing,
Kunthi    who  was in trouble  .

Salutations to the lord   who is as pretty,
As nectar like moon of full moon day,
Salutations to Lord   who has fame,
Of tearing asunder the clan of his  enemies

Oh lord who lies down on lord  of serpents,
Who is   the  divine purusha  salutations,
Oh  Lord whose  twin feet  are in heart of  people,
Oh very  kind one  , salutations

Oh Lord who lives is  Vama pura, who is pretty,
And has pretty limbs  , salutations,
Oh lord who blesses  , who is of emerald  colour
And  who is full of tasty  and  alluring, salutations,
Salutations  to Vasudeva,
Who is lord of vama pura